Drop B Tuning Guide For Guitar

Every guitarist, from beginner to maestro, understands the importance of their instrument’s tuning. While standard tuning is by far the most common and widely used, there are other options to suit different styles of playing.

One of these tunings is called Drop B tuning. While it differs from standard tuning, Drop B is a popular alternate tuning, especially for heavy metal and rock. This guide will explore Drop B tuning — including how to tune to Drop B, the best guitar strings to use for this tuning, and songs you can play in Drop B!

What Is Drop B Tuning?

Drop B differs significantly from standard tuning in that the lowest three strings are arranged so that you can play a power chord with one finger. Simply cover the three low strings on the desired fret with a barre chord shape and then you have an easy-to-play power chord.

All of the ‘Drop’ tunings are like this, in terms of playing power chords with one finger, to make certain progressions easier and allow you to play them faster.

Other common drop tunings are Drop D and Drop C. Drop B, however, is downtuned lower than both of those. The low tuning and easy-to-play power chords are why Drop B is mainly used for heavier rock music, often with distortion (lower tuning can give distorted guitar a darker or “chunkier” sound that is great for playing heavy riffs, and for accompanying harsh/screaming vocals or baritone singers).

How Do You Tune A Guitar To Drop B? As you learned when you first picked up a guitar, the notes in standard tuning are as follows:

The notes in Drop B are ‘dropped’ much lower than these notes, they are:

To do this, use a tuner (pedal, clip-on, cell phone, etc.) and downtune until you’ve reached the desired notes.

A possible complication when you downtune as significantly as Drop B, is the string tension can become too weak or too loose if using a light gauge string.

Since the notes are much lower in pitch, the strings are looser on the fretboard. If you are using a .012 set then you’l probably be okay (although, you may want guitar strings that are packaged specifically for drop tunings, which we cover below).

But, if you are using .009 or .010s, then they may be too loose and be uncomfortable to play or sound poor. Staying in tune can also be a problem if there is not enough string tension.

The Top 5 Guitar Strings For Drop B Tuning D’Addario is a brand that every guitarist will recognize as their strings are so prevalent. The XL148s are a great string for Drop B tuning due to their versatile nickel-plated steel design and their higher gauge. The thicker strings will allow you to comfortably play in drop tunings and sound great while you do it.

Note: These are the strings that I personally use on my guitars that I have tuned in Drop B and Drop C. They work great for both tunings, provide long sustain, and good tension on the strings for metal and hard rock playing. The Ernie Ball 2214s are quite aptly named Mammoth Slinkys. There are strings with a very thick gauge, starting at .012 and ending at .062, making them perfect for playing in Drop B tuning. This may take some getting used to if you typically play lighter gauge strings, but it is worth the switch! The GHS Boomers are a beloved set of guitar strings that have been around for quite some time. Very popular among gigging guitarists, GHS has been making guitar strings since 1964. The Boomers have a great range in string gauge, starting at .010 and ending at .060, giving you a great mix of intermediate and heavy strings. These Elixir Nanoweb strings are a great option for a guitarist looking to play in Drop B. Similar to the previous set of strings on this list, the top strings have a far lighter gauge compared to the heavier gauges used on the lower strings. The Nanoweb coating also provides added durability and sound quality. Going back to the famous Ernie Ball strings, the Not Even Slinky strings are exactly what they sound like: a heavy gauge set of strings that don’t bend or “slink” very well. This heavy gauge, as we have covered, lends itself beautifully to Drop B tuning and will serve you excellently.

Ten Songs In Drop B To Learn (With Tabs)

A classic tune by the progressive metal band Tool, “Parabola” (with “Parabol” as an intro) is a hard-hitting, diverse song in Drop B that is great to learn. There are different parts, some sparse and some busy, that have a lot to offer to any guitarist.

“Don’t Stay” is a great song by Linkin Park. The guitar parts are mainly distorted chord progressions in Drop B that should be rather straightforward to learn. It is absolutely a fun song to play along with.

Chevelle is a metal band that uses Drop B tuning relatively often, and their song “Jars” is a fine example. It is a mid tempo track, with a distorted guitar groove that rocks and will be awesome to learn and play.

In this track, Five Finger Death Punch covers the Bad Company song, “Bad Company”. It is a cool version of the song, and even cooler is the fact that it is played in Drop B. There is also a good mix of chords and melody lines to play throughout the song.

“Whispers in the Dark” is a popular track by the band Skillet. It is rather pretty, despite the distortion, as there are some nice sounding chords and riffs through the song. The different parts will certainly make this a fun challenge to take on.

“The Vengeful One” is a commonly played track by Disturbed that is one of their few songs in Drop B. It is heavy and loud, with a good amount of chords to play that will help you develop your drop tuning skills.

This song is a slight change of pace compared with some of the others. “Bones” by Young Guns is a slower and less heavy Drop B song that offers you a bit of a different style and perspective as a guitarist. It also is not terribly difficult to learn as well.

As mentioned previously, Chevelle is a band that enjoys using Drop B tuning for their guitar parts. “Send the Pain Below” isn’t too heavy, and has some nice dynamic range, especially with the softer parts, that are definitely beneficial to learn.

This track, “Pieces” by Red, is one that is unique on this list in that it features an acoustic guitar part in Drop B. While Drop B is most commonly played on an electric guitar (usually with distortion), this beautiful song by Red shows you that not all Drop B songs need be heavy nor electric.

We’ll round out this list with another track by Linkin Park, “By Myself”. It is a return to a heavier sound compared to the previous song, and is also extremely easy to learn. This is a great song to practice the Drop B barred power chords and match your tone to the recording. 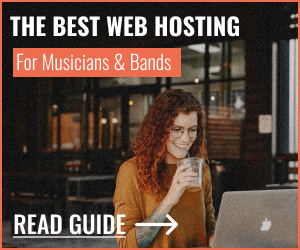